"Don't do the enemy's work for them."

Tirith is typically dressed in a black traveler’s cloak and keeps his spellbook in his backpack. He is normally mild-mannered and tries his best to blend into a crowd.

On Audrian’s Isle as Quartermaster and at times of open war, his demeanor is different. He will wear multiple spellbooks and magic items and practice spellcraft openly so other Overtaken may learn how to weave magic. He is frequently followed by Feistel, his familiar taking the form of a great horned owl.

Tirith is the son of an assassin father and a thief mother. In adolescence, he was told that the Dawnstar family name was created in secret defiance of the Fangs, and that it references that which vampires can’t resist: the rising sun.

Since Alestart was effectively a blood farm, his family made a living breaking the law to bring in gold and contraband for all of their survival. Minor theft from city officials and an occasional assassination from his father for advancement in the local thieves’ guild were normal, and brought in enough gold to pay off anyone who was a threat to their survival.

Threats to survival dominated Tirith’s mind for years. He always kept a mental list of the names of his family’s enemies in Alestart. His parents frequently made enemies through their trade who needed to be paid off, or worse.

When he came of age, Tirith’s parents journeyed north to Coldbay, leaving him a small inheritance, a point of entry with the Thieves’ Guild, and the secret of the Dawnstar family name. The Dawnstars derived strength from subtlety and distributing themselves far and wide to avoid persecution in case the secret of the family name was laid bare.

In his early twenties, Tirith built up a secret collection of contraband by trading notes containing Thieves Guild gossip smuggled inside books of Fang propaganda. His point of contact was a tabaxi named Mahjeet, who would sell them to buyers who were interested in getting dirt on Guild members. Eventually, Mahjeet offered back his own wares – a scroll that he was convinced held lyrics to a song. He hoped Tirith could take a look and translate it.

After his translation was completely unsuccessful, Mahjeet came upon a book that was surprisingly not Fang propaganda. Tirith pointed out that it was written in the same language as the scroll Mahjeet had wanted him to translate, and negotiated to buy it for 150% markup instead of double, considering that Mahjeet had already loaned him the scroll.

The tome was written entirely in Celestial. Over the years, he worked to understand the form of the language it was written in. He started to piece together that it was an introduction to the war tactics of mages in what he could only assume was a far-off land called Dulain.

Ignorant to the fact that the House of Lore had erased Wraxnia’s past, he studied the Art of War Magic, with the notation of Mahjeet’s scroll giving him another point of reference for the celestial language. As it turned out, the scroll contained an abjuration spell that was reproduced in a different notation in the book, a fortunate introduction to reading arcane texts. In addition to spells, the book discussed many aspects of Dulain’s style of warfare: unit tactics, planning, and subterfuge especially. Fascinated by the topics and incensed at the Fangs keeping basic properties of the world hidden from him, he resolved to translate the whole thing.

Tirith was paranoid that the book was forbidden, but was still ignorant to just how forbidden. Still, he devised a code that he began to use for his notes. Eventually, need drove him to be able to read his notation as fluently as the common tongue. He still uses it to this day.

For years, he practiced the spells written into the Art of War Magic under the noses of authorities beholden to the Fangs in Alestart, living a double life copying and distributing Fang propaganda and nicking the extra ink for his own use. Eventually, the police came knocking to make sure he wasn’t stealing ink, which forced Tirith to throw the forbidden texts he had acquired into the stove. Fortunately, he had given some of his notes to Mahjeet for safe keeping, and was able to re-scribe the spells from memory. The Alestart police suspected nothing, but he had no more texts to study.

When the rioting in Alestart began, he heard the name of Dulain once more. Like a rumor on the wind of hawk wings, it caught his ear. He asked someone who looked like they were in charge about it – someone who Tirith now knows as Ogden Thresher. In his usual jovial and somewhat blunt tone, Ogden gave Tirith a history lesson.

He finally knew the truth. Wraxnia was nothing more than Fang-occupied Dulain, and Tirith had been inadvertently studying for years about how to turn the tides.

With new resolve, he penned some notes quoted from his studies to the new Overtaken, and marched north to Coldbay…

Tirith made good friends with several members of the Overtaken, especially the divination wizard John Ford, who he would spend weeks exchanging notes and spells with. John was the first scholar he had seen who had been practicing arcane magic in sheer defiance of the Fangs. After the deaths of Auxetikus the Exposed, Ribo, and Gunther, the two of them were the last wizards alive in the Overtaken (apart from the Owl) before the death of John Ford at Lockey’s End.

John’s party recovered his spellbook, which he had bequeathed to Tirith. Over time, he learned how to cast John’s divination spells for himself, writing notes next to John’s own.

Tirith wants to keep John’s memory alive, and believes that carrying John’s spellbook caused a twist of fate that granted him his life and cleared him of his bounty after the Overtaken defeat against the imperial dhampir during the Coldbay lockdown. 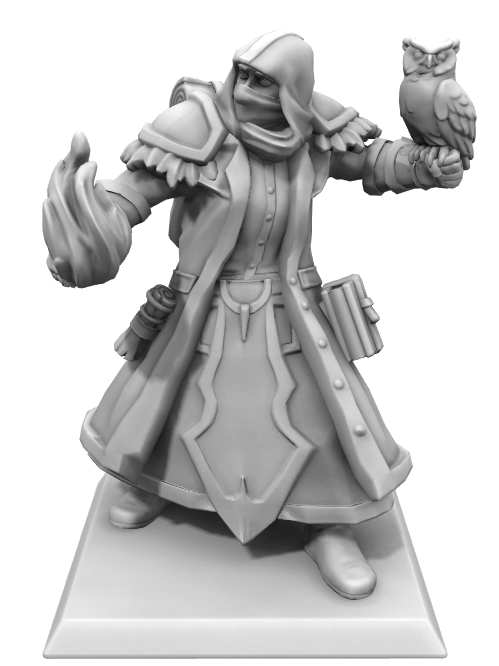