Before reading, please understand that this is the character’s true canon. Please know that this story has yet to be revealed to any player character. As far as most of the Overtaken are aware, Cedric Rackett is a simple Half-Elf Lore Bard.

Dox was always told this one truth: never reveal your true face to anyone. His family was many, but they did so well hiding themselves fronting as a bakery. Until they didn’t. He was 11 when the Fangs came. A stroke of luck had Dox running errands at the time, coming back to find his family in chains and their true selves on display for all the world to see:

Quick thinking had him shift immediately and run.

To this day, he regrets what he didn’t do. What he couldn’t do. He was just a child, yet…

Perhaps it would have been better to have gone with them.

Years pass, many opportunities for a young changeling in Coldbay. He worked with small gangs of criminals, always hiding and running as soon as his cover looked to be blown. All until one day he ended up in an apprenticeship with Keldiver Wrose, a bookbinder and calligrapher. And so, his first permanent persona was established: Jacques Renard, Human Calligrapher.

Not long after, Dox found another mentor in The Widow. She was truly known Delilah Emberbrook, a woman who made a living off secrets, A Bard who dealt in Whispers. Dox found himself immediately drawn to her. And found himself establishing a new name, Erren Twoleaf.

He assisted in the everyday works of her underground kingdom, watching as both commoners and fangs flocked to “the Widow” to ensure their secrets did not get out. Ten years were spent under her tutelage and they were good.

But, while watching and learning, Erren had met Thera, a dwarven prostitute in his mistress’s employ as a spy. And he couldn’t help but fall for her.

When alone at night, Dox liked to pretend that she had felt the same way. He would never know.

After going to Delilah for permission, she flew into a rage. For a reason Dox still does not know, she despised the idea of him settling down. Delilah would’ve murdered him that night had it not been for a last ditch play: showing his true face. He ran.

And the next morning, Thera was dead at the hands of a Lore Echelon.

The next night, Delilah Emberbrook was seen murdering a human official with the use of magic in front of a crowd of over three dozen witnesses. She got away and would later be captured, ranting about a changeling in their midst and proclaiming her innocence. The Widow was never to be seen again.

Her massive library was filled with tomes and stories, including a small journal that seemed to be bound with skin and had an eye on the front, setting him on the path of Whispers… The library had many things, including lots and lots of secrets to exploit…

A new hand was at the reigns of blackmail in the city. And it was inexperienced at best. Erren Twoleaf was reportedly the new man behind the curtains, calling himself “the Stagehand” and working through proxies such as Dawn Filligree, Perrin Durli, Syrah Jasper, and Cedric Rackett.

The under-new-management blackmailing empire lasted five months before collapsing. The Stagehand had tried blackmailing the wrong person, a certain Lore Echelon who raided the operation. Everyone involved was found and never heard from again… save for Erren Twoleaf himself and a few of his proxies.

After all, who else will find out what happens to Changelings if they are never heard from again?

If you have reached this far in the story, please keep in mind that this character is currently being played in a manner where the fact that he is a Changeling is not common knowledge. Currently, only one other player character is aware of his true race. He also has a habit of being shifty about his background as that it in is his nature to be distrusting. 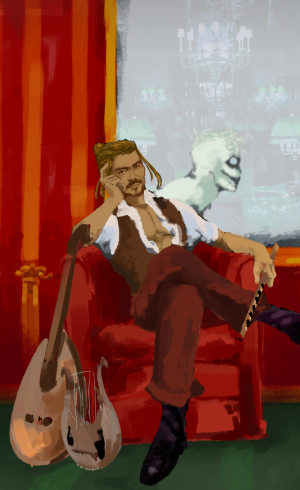