Azreal was born Pelleon Brichwood from humans Jacen and Kiki Birchwood in the city of Coldbay. They were happily surprised with discovering the that he was an aasimer , at first. With as presence of Fangs and security increased in the city, the young couple feared finding out that they have given birth to an aasimer. So they did the unspeakable and set the him afloat in a basket in the Krackens Maw and left for dead. That’s evening a fisherman by the name of Jacob Stormbringer was sailing home and noted a glowing basket in the water. When he came up to the basket he was shocked to see a baby with glowing wings in the basket. Seeing this as a sign from his deity Heironeous, there was no way he could not save this child. When returning home to his wife Mary, they agreed to raise this child as their own under the name Azreal.

Childhood
Azreal grew up helping his father knowing nothing of his past heritage. He often helped his father with fishing and sailing. Every night before be the family would pray to Heironeous and thank him for his blessing. In his downtime he practiced with a sword that was given to him by his father. His father taught him how to properly use the sword and that it should be used to only protect himself and others. A common saying his father would tell him is “All evil needs to exist is good men to do to nothing” many times his father would look off like remembering something afterwards. Jacob would tell stories to Azreal at night of knights defeating evil full of valor and of wars long ago.

Young adult
Azreal eventually got tired of being at home and decided to get work on other ships and see the world. He met many people along the way. Captain Gabriel Fletcher took especial interest in Azreal and convinced him to stay on as his First Mate for a while. Gabriel taught Azreal how to properly run a ship and create a profitable business as fisherman. After a few years Azreal saved enough money to buy his own ship and begin his career.

A Life Adrift
Azreal bought a bout and christened it “Life Adrift” in honor to his life will always be in motion because of his aasimer heritage. Knowing that he didn’t have enough starting gold to hire a full crew for fishing, he began the maiden voyage doing a supply run from Coldbay to Alesdrin. Halfway to the destination though “Life Adrift” was attacked by pirates. The initial volley of cannon fire badly damaged the ship and killed most of his crew. Azreal was wounded and lost his sword in the explosion. Realizing that his chances of survival were slim hey prayed to Heironeous like his father taught him. A voice entered his head offering a way to defend himself, but he will need a favor later in return. Seeing no other option Azreal accepted wondering why Heironeous would want a favor. A sword appeared in Azreal’s hand and beams fired from his hands. One by one the pirates were killed. The pirates were dead, but “Life Adrift” was too badly damaged and began to sink into the sea. Azreal climbed aboard the pirates ship and sailed back to his parents home.

A Paladin’s way
Returning home his parents welcomed him with open arms. As Azreal explained what happened with the pirates he could visibly see that his parents were concerned. Jacob took Azreal deep into the forest to a very old tree. Jacob told Azreal to began digging at the foot of the tree. After hours of digging the found a large chest with a symbol of a hand holding a lightning bolt on it. Jacob explained that years ago he was a Paladin of Heironeous. Since it appears the Heironeous has chosen Azreal it is time for him to learn the ways of the paladin.
Azreal learned how to be a paladin from his father but it was realized that some of the abilities of Azreal were different than what Jacob was used to dealing with. Jacob taught Azreal what he could and his mother who was once dabbled in warlock magic was able to teach him the basics.

For the Blood of the People
Realizing that Azreal was meant for more than a fisherman’s life, he wished his parents goodbye. Along the way, he heard rumors of a rebellion forming to overthrow the fang overlords. He began his search for this group and eventually joined them on Audrian’s Isle. 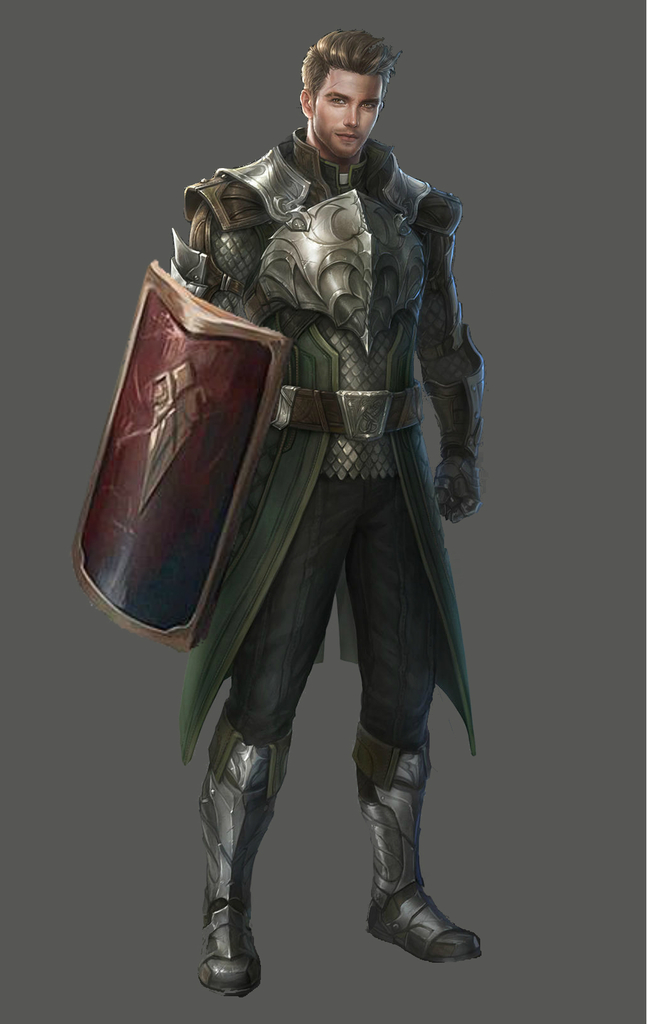