Ajax’s appearance can be somewhat confusing to behold. His once deep blue skin has been replaced with dark purple scales. His kelp-green hair is over 20ft long now and writhes as though alive. The front of his throat bears mushroom gills, like those of a myconid. One arm, gripping a longsword named Plaguebringer, is covered in yellow-brown pustules. One eye has been replaced with a brilliantly colored orange agate stone. In the heat of battle, his remaining eye scans across his adversaries. Sizing them up, analyzing their weaknesses, and deciding which part of them he must consume to obtain their abilities.

Ajax is a blue mage. It is a natural fit for him, as a Triton. In the depths of the northern oceans where he was raised, every day was a harrowing nomadic trek. Seeking the scarce viable food, battling predatory sea creatures, and evading capture by pirates and Fangs alike taught him the importance of improvisation and adaptation.

One day, Ajax saw a group of blue mages exploring the ocean floor, with gills they had grown from consuming sea dwellers. He was awestruck. He knew he had found his purpose. Ajax joined them, learned their ways, and began his personal journey of evolution. After hearing some rumors of mysterious heroes rescuing people from Fangs, he decided to travel abroad on dry land, to see if the ages old rebellion had risen anew and to help however he could. The Fangs are more than oppressors and adversaries to him. They are abominations, antithetical to the progress of organic life.

“I have sworn myself to find the limits of mortal flesh, and surpass them. I will grow, adapt, and evolve. I will take into myself anything that makes me stronger, until the Fangs themselves look up in terror at the apex predator I have become! Then, when my experiment is complete, my body perfected, I will share this progress with the people of this world so that they too shall achieve their truest physical potential!” – Ajax Gymnothorax-mordax 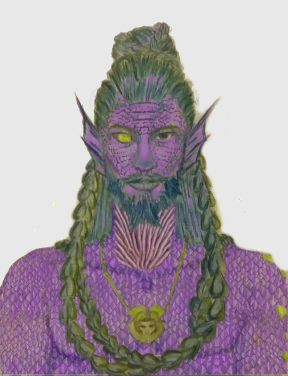